How does venture capital work?

Venture capital investing is huge. The last two years have been record years for venture capital (VC) investing in the US. In 2021, a mind-blowing $330 billion was invested across 17,054 deals, almost double the amount in 2020, according to Venture Beat. Whether you are looking to get funding from a VC fund or become an investor, it is important to get the question answered: How does venture capital work?

Venture capital came into being as a result of how capital markets are structured and regulated. Banks are prohibited by usury laws to charge high interest on loans. So, loans to startups, which are risky investments and would require high interest rates, are of no interest to them. Therefore, getting a loan from a bank is not an option for entrepreneurs.

Banks will only consider loans to businesses that have hard assets that can serve as security against a loan. Very few startups that need finance have hard assets worth much. Due to protective regulations, investment banks and public equity are also not open to entrepreneurs.

How does venture capital work?

The venture capital journey involves four main participants: entrepreneurs looking for funding, PLs who invest in startups for high returns, GPs who find and invest in promising startups and steer them to succeed, and investment bankers who facilitate startup exits.

Over two years, the GPs draw investment funds to invest in promising companies they targeted and believe will generate high revenue. Over the next five to seven years, GPs use their expertise and industry connections to help new ventures scale. During that time, the LPs are silent partners, waiting for the return on their investment. This time span varies for different deals and different startups depending on various factors.

New ventures that seek funding go through different growth stages, which determine the stage of venture capital they would qualify for. VC firms also tend to focus on certain funding stages. Most VC firms invest in late-stage ventures.

VC firms prefer to spread the risk among several parties by investing with other firms. There is usually an investor that leads the round, followed by other investors. This is typical of most stages of funding.

VC firms tend to invest in high-growth sections of the market. In fact, this factor weighs much more than the brilliance of the entrepreneur. No matter how brilliant the business idea, if the startup operates in a low-growth market, the likelihood of VC investment is nil. According to Statista, the internet industry is a hot investment sector, attracting $25.9 billion in the US 2021. Healthcare, computer hardware and services, and mobile and telecommunications are also hot sectors for VC investment.

Another factor that influences VC investment is ensuring that any company they invest in has a competent management team that has the ability to ensure that the company meets with the growing demand. The people at the helm must be able to take the company to optimal growth.

How VCs make their money

Understanding how VCs make their money is important when trying to answer the question- how does venture capital work? GPs make money in two ways: carried interest on their fund’s return and an annual fee, which is a percentage of the fund’s total value.

What VCs do to earn their compensation

VCs, specifically GPs, may be handsomely rewarded, but they really have to earn it, and in this risky field, they stand to lose a lot. GPs earn their compensation for:

If the GPs are successful and the portfolio companies do well and achieve an exit strategy, all parties benefit: the LPs get a huge return on their investment, as do the founders, GPs, and investment banks.

Startups are a very risky investment option, and the reality is that only one out of every ten succeed. This is why VC firms seek out startups with a high growth potential – the one that promises to yield ten times the initial investment amount to make up for the losses on the other nine investments.

The entire process, from funding and supporting the venture through growth and eventual exit, takes between seven and ten years.

Venture capital investment from the point of view of the entrepreneur

The process of getting funded by a VC takes around six months. The first step is to find a VC that operates in your industry. Trustworthy online sources like Crunchbase, CB Insights, and others will lead you to names, but you still have to do your due diligence. Don’t just go for the most successful VC and VC firms. Here are a few pointers.

As for introductions to your VC of choice, the best would be from an entrepreneur that made a lot of money for the VC through a successful exit.

If the VC expresses genuine interest, you might get a call, and if the interest continues, you will be asked to do a pitch deck. There are many resources online about preparing a winning pitch deck and how to deliver one, including videos of some legendary ones by successful startups.

If interest continues, you will be invited to do the presentation in person at the offices of the VC firm. This is the opportunity to make a personal connection and impression. If you survive this nerve-wracking experience and answer all questions to the satisfaction of the VC, you’ll be invited to repeat the process for all the partners. On this occasion, you will also have to field many questions.

If you manage to convince all the partners, you’ll receive a term sheet. This is a nonbinding agreement that sets out the basic terms and conditions under which an investment might be made. It clarifies terms regarding investment amount, percentage stake, the company valuation, investor commitment, voting rights, and more.

The term sheet is not a binding contract. It sets out the most salient points that the parties agree to. The final document is only drawn up once the parties have reached an agreement on all the details.

Following the term sheet, the VC will initiate the due diligence process, which may take a couple of months. If there are no hiccups, and once all official documents are signed, the cash will be deposited in the founder’s business account.

VCs typically receive a 15% to 45% equity stake in the company in return for their involvement with the business. It is in their interest to be involved in the running of the company or at least have a say in some major decisions regarding its direction as company decisions could impact their investment. After all, they are responsible for ensuring that the limited partners get a handsome return on their investment.

To this end, VCs will request board involvement in return for the investment that they are making in the company. They could opt for a board of director seat, which allows them to participate in major decisions regarding the company, or they can be a board observer with no voting rights.

It’s important to note that the average VC fund comprises many portfolio companies, and each GP is responsible for multiple companies. It is therefore understandable that, in practice, the partners are not knowledgeable about all the industries their portfolio companies are operating in, so the advice they can offer is oftentimes limited.

What do VCs look for in founders?

VCs are interested in good ideas, but they don’t invest in them. They invest in a founder and management team that show they have the skills and impetus to grow the company, lead it successfully when it has become a much larger concern, and eventually take it public.

The fact of the matter is, the founder is usually the one with a brilliant idea, but seldom the one to commercialize it. Many founders don’t know how to lead a large company – that requires different skills. So, startups looking for VC funding must prove that they have the financial know-how within their management team to take the company to the desired exit. Alternatively, they should have enough insight to realize that they need such a person on their team.

It’s possible for entrepreneurs and VCs to work together and make huge profits for all stakeholders, but the system works only some of the time. Although astronomical sums of venture capital are involved, it’s still rare for startups to experience a successful IPO or very profitable acquisition. Welcome fellow physician entrepreneurs. My goal is to provide actionable content that will you help navigate the changing world of medicine and business.

You can connect with me on: 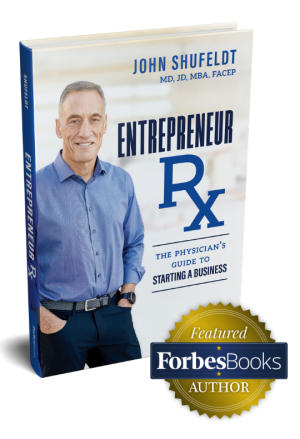 From identifying winning business ideas to raising necessary capital, you will gain a comprehensive insider’s view into strategies that can help you develop and nurture a successful business. Don't wait to start your journey, purchase a copy today.